It Started With A Poem

Everything happens for a reason.

Indeed, that was a classic sentence. We, or Me, especially, already read and listened about that words too often. I know the meaning of its, but never thought too much about its. At least not until i realized , by having those special experiences by my self, that there is something could really happened for a reason. And i used to call it as destiny.

Destiny..sometimes bring me to some places to meet some peoples. These people, as time goes by, will become someone special in my life. Maybe they will become my bestfriend, my
nonblood family, or husband *wish i'm gonna meet the last one as soon as possible*

Well, mostly they will become my bestfriends. For an example, i believe that i was destined to work at my recent office , except to have so many knowledges and experiences about life, is to meet someone who someday becomes my craziest 'padang' bestfriend ever, Sutci , who recently popular with her dangdut's name : UCI TSUNAMI 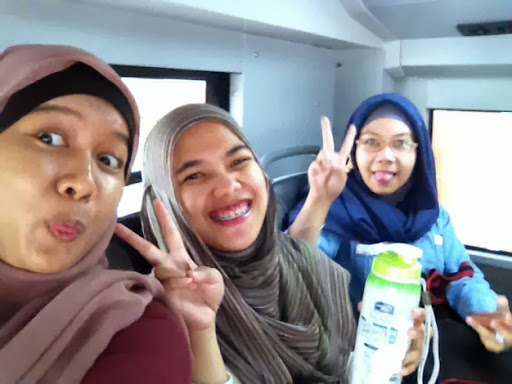 *Me, Uci and Anggi enjoyed our holiday in Singapore*

I never choosed her as one of my bestfriends, but the times did. We experienced almost everything that we need to in our girlfriend relationship for almost three years *geez , feels like harrem story LOL*. Until one day, in the nearest mall of our office, we had this conversations.

Me : I don't know Ci, seems like i was destined to work here. I, even, have known GM sinced i was in junior high school. I read his poems, learned about it and joined a poem reading competition. Hahaha
Uci : Really ? What competition ?
Me : Poem reading competition which was held by Gramedia, few years ago. I still remember the book and the tittle of the poem which was created by GM. The tittle was ...
Uci : Puisi buat Yap Thiem Hien
Me : Yeahhh, how did you know that ?
Uci : Because i also joined that competition! LOL
Me : LOL!! Really ? But aren't you in Depok at that time ?
Uci : No, i was a junior high school's student at East Jakarta. So i can joined that competition, it was held in gramedia matraman. Wasn't it ?
Me : Yes it was, do you still remember the poem?
Uci : Of course!!
Uci & Me : KYAI BISRI, DIMANAKAH KAU KYAIIIIII ????
Me : LOL, Silly wasn't it ? Did you win the prize ?
Uci : Not as a big three, but i was about in the big 5 winner
Me : Really ? How could this happened, me too Uci!! I was in the big 5 winner. So, we can say that, few years ago we already standing side by side on a big stage, but we didn't know each other...or didn't care actually.
Uci : Yes we were, and now for almost 12 years later...we are standing together..side by side and laughing to our first coincident meeting. LOL, it just like a Korean Drama!!
Me : Damn, i started to curious that competition was a curse to both of us. Because we trapped in this situation and work at the same office where you know that the poem's owner also worked in here. LOL
Uci : BISA JADIII! LOL

Yup, my first meeting with Uci was'nt three years ago as i thought before. But more than that, so it doesn't surprised (me) anymore if we have some chemistry and feel so connected to each other. Because God, already gave us a sign about our future (or recent condition) sinced 12 years ago to both of us. Funny, isn't it ? How destiny works in to your life, you could never predicted that, it just happened and it was planned perfectly maybe while you are sleeping in your mommy's womb.

Lets play our imagination a little bit far, if i have met one of my bestfriends since 12 years ago but i never realized it until few months ago. It is also possible that i have met my soulmate or my half , few years, months, hours, or maybe minutes ago.... But i just didn't realize it. Not yet. Not this time.